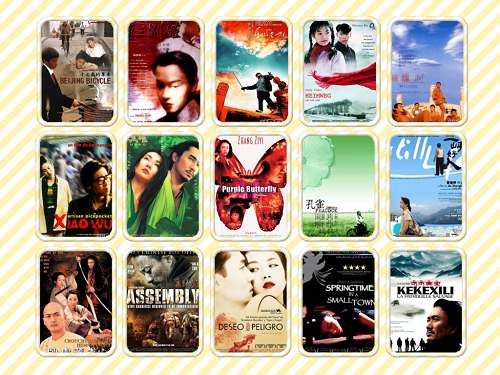 The history of Chinese film has three separate threads of development: Cinema of Hong Kong, Cinema of China, and Cinema of Taiwan. The cinema of Mainland China after 1949 has grown up somewhat suppressed by the Communist regime until recent times, although certain Chinese films are still being routinely censored or banned there but allowed to be played abroad.

The Beginnings: Shanghai as the Center

Motion pictures were introduced to China in 1896. The first recorded screening of a motion picture in China occurred in Shanghai on August 11, 1896, as an “act” on a variety bill. The first Chinese film, a recording of the Beijing Opera, The Battle of Dingjunshan, was made in November 1905. For the next decade the production companies were mainly foreign-owned, and the domestic film industry did not start in earnest until 1916, centering around Shanghai, a thriving entrepot center and the largest city in the Far East then.

During the 1920s film technicians from the United States trained Chinese technicians in Shanghai, and American influence continued to be felt there for the next two decades. The first truly important Chinese films were produced starting from the 1930s, when the “progressive” or “left-wing” films were made, like Cheng Bugao’s Spring Silkworms (1933), Sun Yu’s The Big Road (1935), and Wu Yonggang’s The Goddess (1934). During this time the Kuomintang struggled for power and control over the major studios, and their influence can be seen in the ensuing films produced. The post-1930 era is called the first “golden period” of Chinese cinema, where several talented directors, mainly leftist, worked. The period also produced the first big Chinese movie stars, namely Hu Die, Ruan Lingyu, Zhou Xuan, and Jin Yan. Other major films of the period include Song of the Fishermen (1934), Crossroads (1937), and Street Angel (1937).

The Japanese invasion of China, in particular their occupation of Shanghai, ended this golden run in Chinese cinema. All production companies except Xinhua closed shop, and many of the filmmakers fled Shanghai, relocating in Hong Kong, Communist- and Nationalist-controlled regions, and elsewhere.

The Second Golden Age: the late 1940s, and the Communist Era 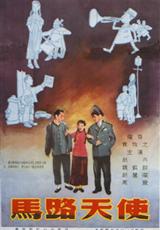 The film industry continued to develop after 1945. A major Chinese production house, the Lianhua Company, re-established itself in Shanghai after the war and once again became the basis for leftist directors. Many showed the disillusionment with the oppressive rule of Chiang Kai-shek’s Nationalist Party. Myriads of Lights (1948), Crows and Sparrows (1949), San Mao (1949), and, most importantly, The Spring River Flows East (1947) are the classics produced during this period. The Spring River Flows East, a three-hour-long two-parter which depicts the struggles of ordinary Chinese folks during the Sino-Japanese war, was immensely popular during its time, making social and political references to the period. The Wenhua Film Company, one of the two important production companies formed by left-leaning film-makers in the city, also contributed some of the masterpieces of the era. A film by Shanghainese director Fei Mu, Springtime in a Small Town or Spring in a Small Town (1948), which was produced in Shanghai prior to the revolution, is often considered by Chinese film critics as the best Chinese film of all time, and certainly one of the most influential. (an acclaimed 2002 remake by one of the Fifth generation Chinese film maker Tian ZhuangZhuang can also be seen)

With the Communist takeover in 1949, the government saw motion pictures as an important mass production art form and propaganda. The number of movie-viewers increased sharply, from 47 million in 1949 to 4.15 billion in 1959. In the 17 years between the founding of the People’s Republic of China and the Cultural Revolution, 603 feature films and 8,342 reels of documentaries and newsreels were produced, sponsored as Communist Party of China by the government. Chinese filmmakers were sent to Moscow to study Soviet filmmaking. In 1956, the Beijing Film Academy was opened. The first wide-screen Chinese film was produced in 1960. Animated_films using a variety of folk arts, such as papercuts, shadow plays, puppetry, and traditional paintings, also were very popular for entertaining and educating children. The thawing of censorship in 1956-7 and the early 1960s led to more indigeneous Chinese films being made which were less reliant on their Soviet counterparts. The most prominent filmmaker of this era is Xie Jin, whose two films in particular, The Red Detachment of Women (1961) and Two Stage Sisters (1965), exemplify the growing expertise China has in the craft of motion pictures.

The Cultural Revolution and its Aftermath 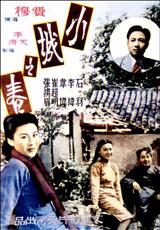 During the Cultural Revolution, the film industry was severely restricted. Almost all previous films were banned, and only a few new ones were produced, the most notable being a ballet version of the revolutionary opera The Red Detachment of Women. Feature film production came almost to a standstill in the early years from 1966 to 1972.

In the years immediately following the Cultural Revolution, the film industry again flourished as a medium of popular entertainment. Domestically produced films played to large audiences, and tickets for foreign film festivals sold quickly. The industry tried to revive crowds by making more innovative and “exploratory” films which take in ideas from the West.

In the 1980s the film industry fell on hard times, faced with the dual problems of competition from other forms of entertainment and concern on the part of the authorities that many of the popular thriller and martial arts films were socially unacceptable. In January 1986 the film industry was transferred from the Ministry of Culture to the newly formed Ministry of Radio, Cinema, and Television to bring it under “stricter control and management” and to “strengthen supervision over production.”

The end of the Cultural Revolution brought the release of “scar dramas”, which depicted the emotional traumas left by this period. The most popular of these is probably Xie Jin’s Hibiscus Town (1986), although they could be seen as late as the 1990s with Tian Zhuangzhuang’s The Blue Kite (1993).

The rise of the Fifth Generation 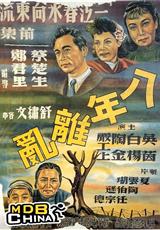 Beginning in the mid-late 1980s, the rise of the so-called Fifth Generation of Chinese filmmakers brought increased popularity of Chinese cinema abroad. The first generation of filmmakers to produce Chinese films since the Cultural Revolution, they jettisioned traditional methods of storytelling and opted for a more free and liberal approach. Yellow Earth (1984), directed by Chen Kaige and photographed by Zhang Yimou, in particular was taken to mark the beginnings of the Fifth Generation. Chen Kaige and Zhang Yimou went on to produce works such as King of Children (1987), Farewell My Concubine (1993), Judou (1989), and Raise the Red Lantern (1991) which were not only acclaimed by Chinese cinema-goers but by the Western arthouse audience. Tian Zhuangzhuang’s films, though less well-known by Western viewers, were well-noted by directors such as Martin Scorsese. Extremely diverse in style and subject, the Fifth Generation directors’ films ranged from black comedy (Huang Jianxin’s The Black Cannon Incident, 1985) to the esoteric (Chen Kaige’s Life on a String, 1991). Other notable Fifth Generation directors include Wu Ziniu, Hu Mei, and Zhou Xiaowen.

The Fourth Generation also returned to prominence. Given their label after the rise of the Fifth Generation, these were directors whose careers were stalled by the Cultural Revolution and who were professionally trained prior to 1966. Wu Tianming, in particular, made outstanding contributions by helping to finance major Fifth Generation directors under the auspices of the Xi’an Film Studio. 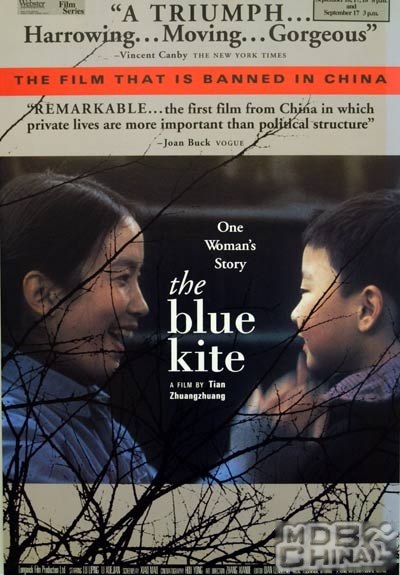 The Fifth Generation movement effectively ended in the Tiananmen_Square_protests|1989 Tiananmen Incident, although its major directors continued to produce notable works. Several of its filmmakers went into self-imposed exile: Wu Tianming stayed in the United States, Huang Jianxin left for Australia, while many others went into television-related works.

Sixth Generation and Beyond

The recent era has seen the “return of the amateur filmmaker” as state censorship policies have produced an edgy underground film movement loosely referred to as the Sixth Generation (from the number of generations since the 1949 revolution). These films are shot quickly and cheaply, which produces a documentary feel: long takes, hand-held cameras, ambient sound (see cinema verite). Many films are joint ventures and projects with international investment. Some important Sixth Generation directors to have emerged are Wang Xiaoshuai (The Days, Beijing Bicycle), Zhang Yuan (Beijing Bastards, East Palace West Palace), Jia Zhangke (Xiao Wu, Unknown Pleasures, Platform, The World), and Lou Ye (Suzhou River). 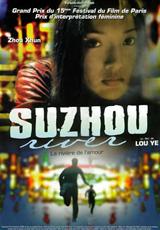 In 1999, the multi-national production Crouching Tiger, Hidden Dragon achieved massive success at the Western box office despite being disregarded by some Chinese cinema-goers as pandering to Western tastes. Nevertheless, it provided an introduction to Chinese cinema for many and increased the popularity of many Chinese films which may have otherwise been relatively unknown to Westerners.

In 2002, Hero (movie)|Hero was made as a second attempt to produce a Chinese film with the international appeal of Crouching Tiger, Hiden Dragon. The cast and crew featured many of the most famous Chinese actors who were also known to some extent in the West, including Jet Li, Zhang Ziyi, Maggie Cheung, Tony Leung Chiu-Wai, and Zhang Yimou. The film was a phenomenal success in most of Asia and topped the U.S. box office for two weeks, making enough in the U.S. alone to cover the production costs.

The successes of Crouching Tiger, Hidden Dragon and Hero blur the boundary between what is Mainland Chinese cinema and a more international-based Chinese-language cinema. Crouching Tiger, for example, was made by a Taiwanese director, but its leads include Hong Kong, Taiwan, and Mainland Chinese actors and actresses; the funding is from overseas. This merging of people, resources, and expertise from three regions (China, Hong Kong, and Taiwan) meant Chinese-language cinema is moving toward an international Chinese arena. 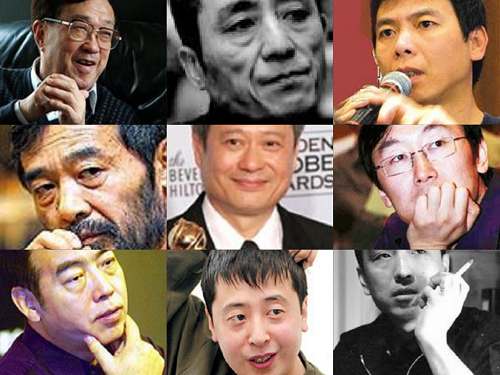